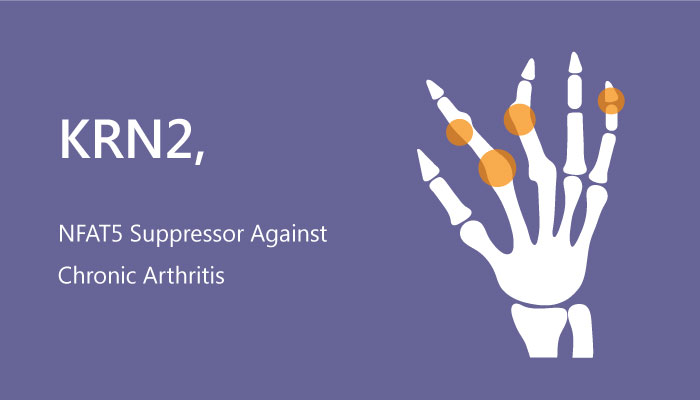 In the previous article “KRN5 is a Nuclear Factor of Activated T Cells 5 (NFAT5) Suppressor”, we introduced a novel NFAT5 suppressor KRN5. And the suppressor is the derivative of KRN2, and shows good efficacy by oral administration. Additionally, the study from Eun-Jin Han, et al. also reported KRN2, as a NFAT5 suppressor against chronic arthritis.

KRN2 showed the strongest inhibition of NFAT5 activity with an acceptable toxicity profile. Firstly, KRN2 exhibited much stronger inhibition of NFAT5-dependent reporter activity in RAW 264.7 macrophages than its analogue BBR and derivative KRN5. And the IC50 was 100 nM.

In AIA models, 8-week-old C57BL/6 mice was injected intradermally by 2 mg of complete Freund’s adjuvant. And KRN2 (3 mg/kg) was given to AIA mice via daily peritoneal injection for 2 weeks. Not surprisingly, results showed that KRN2 was effective in suppressing AIA in which innate immune cells play a predominant role.

And in CIA models, which is a classical animal model of RA in which adaptive immune cells, including T and B lymphocytes, play a dominant role, 8-week-old DBA/1J mice were immunized with bovine type II collagen emulsified in CFA on day 0. On day 14, a booster injection of CII in incomplete Freund’s adjuvant was given in the left footpad. After one week, KRN2 (3 mg/kg) was injected daily into the CIA mice. The authors found that KRN2 was also effective in suppressing CIA as well as AIA in mice, decreasing the production of pro-inflammatory cytokines and autoantibodies as well as macrophage infiltration.

What is the difference between KRN2 and KRN5?

From previous blog, we can know that KRN5 showed high oral bioavailability and metabolic stability. Moreover, there was no noted side effect.

And for KRN2, it showed stronger inhibition and exhibited efficacy both in AIA and CIA models. And the toxicity profile was also acceptable.