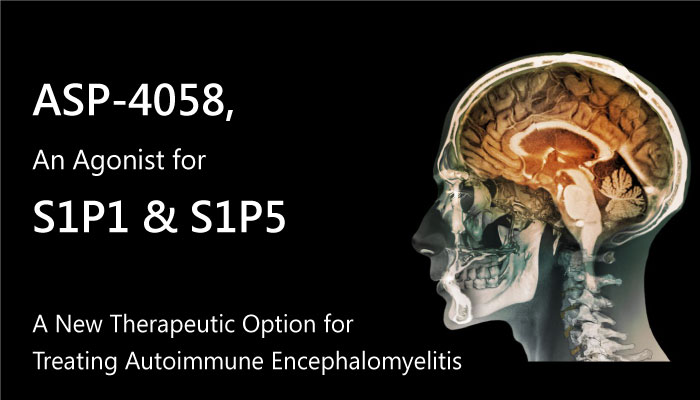 Sphingosine-1-phosphate (S1P) is a biologically active sphingolipid. It functions via the five G protein-coupled receptors (S1P1-S1P5). S1P1 plays a major role in regulating lymphocyte trafficking, exerting its immunomodulatory effect. A study from Rie Yamamoto, et al., reported the discovery of a S1P receptor agonist selective for S1P1 and S1P5, ASP4058. Additionally, the researchers detailed the pharmacological profile of ASP4058. The authors found that ASP4058 is a next-generation, selective and oral bioactive agonist for Sphingosine 1-Phosphate receptors 1 and 5 (S1P1 and S1P5).

The effect of ASP4058 was identified both in vitro and in vivo. In vitro, the EC50 values of ASP4058 were 7.4 nM and 7.5 nM for S1P1 and S1P5, respectively. And as expected, ASP4058 inhibited the cAMP accumulation in the cells dose-dependently, with an IC50 value of 2.1 nM. ASP4058 treatment almost completely suppressed the expression of MCP-1. By the way, MCP-1 is a critical chemokine for macrophage recruitment and Intracranial Aneurysm (IA) formation.

In vivo, oral administration of ASP4058 reduced the number of peripheral lymphocytes. In addition, the agonist also inhibited the development of experimental autoimmune encephalomyelitis (EAE) in rats. Furthermore, ASP4058 prevented disease recurrence in a mouse model with reduced EAE recurrence. Moreover, the compound showed a wider safety margin than fingolimod for bradycardia and bronchoconstriction in rodents. Not only that, ASP4058 also suppressed intracranial aneurysm through promoting endothelial integrity and blocking macrophage transmigration. Effectively, A dose of 0.01 mg/kg could significantly suppressed the the size of the IA by ASP4058.

In conclusion, ASP4058 represents a new therapeutic option for treating multiple sclerosis. Importantly, the method is safer than fingolimod, which is a nonselective S1P receptor agonist. It is also a strong drug candidate for IA treatment.