Gamma secretase (γ-Secretase) is a kind of multi-subunit protease complex, which is an indispensable membrane protein. Specifically, γ-Secretase cleaves one-way transmembrane proteins at residues in the transmembrane domain. Besides, the most well-known substrate of γ-Secretase is amyloid precursor protein, which is a large intact membrane protein. Notch signaling is abnormally activated in about one-third of non-small cell lung cancer (NSCLC). Moreover, Gamma secretase inhibitors (GSI) are a class of small molecule Notch inhibitors. And they are a single drug or in combination with chemotherapy in cancer clinical trials. Furthermore, GSI was originally designed to treat Alzheimer’s disease by reducing the formation of amyloid-beta in the brain. The Notch is a NSCLC driver because it can directly promote the occurrence of lung cancer. BMS-906024 is an orally active γ-Secretase and Notch inhibitor. 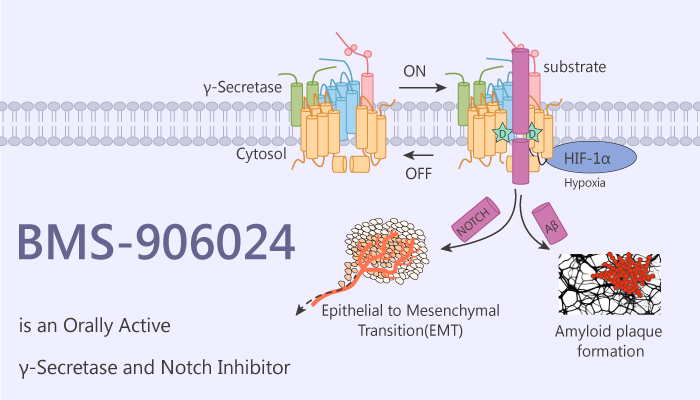 BMS-906024 is an orally active γ-Secretase and Notch inhibitor.

In the second place, BMS-906024 reduces Notch1 ICD levels in all six lung cancer cell lines with 5-100 nM for 72 hours. Furthermore, BMS-906024 at 100 nM, has no effect on total Notch1, and down-regulated Hes1 transcript. Importantly, BMS-906024 is not cytotoxic in vitro in these cell lines at concentrations as high as 800 nM in 14 NSCLC cell lines. Particularly, BMS-906024 enhances the anti-tumor activity of Paclitaxel in vitro.

Last but not the least, BMS-906024 of 8.5 mg/kg by oral gavage on days 1 through 4 of each week for 3 weeks, significantly enhances the tumor growth inhibition of Paclitaxel (36 mg/kg). By the way, BMS-906024 enhances Paclitaxel-mediated cytotoxicity in vivo in NSCLC through a combination of inhibiting proliferation and promoting apoptosis, in a p21 and p57-independent manner.

All in all, BMS-906024 is an orally active γ-Secretase and Notch inhibitor.