As previously introduced, we all have known that RRx-001, a hypoxia-selective epigenetic agent and a radio- and chem-sensitizer. Additionally, it triggers apoptosis and overcomes drug resistance in myeloma. RRx-001 exhibits potent anti-tumor activity with minimal toxicity. Today, I’d like to introduce the role RRx-001 in the immunization field.

A study from Pedro Cabrales demonstrated that RRx-001 acts as a dual checkpoint inhibitor by downregulating CD47 and SIRP-α.

Moreover, RRx-001 polarizes M0 and M2 macrophages to the M1 phenotype. The results identify an RRx-001-dependent surface decrease of CD47 on tumor cells and of SIRPα on macrophages. Rather than a CD47 or SIRPα blocking antibody, which participates with platelet aggregation, red blood cell hemagglutination, and dose-limiting hemolytic anemias. RRx-001 is a well-tolerated, minimally toxic, and nonmyelosuppressive small molecule that downregulates the CD47-SIRPα axis and is not associated with hemolytic anemia.

Collectively, these data support the conclusion that RRx-001 is a minimally toxic dual checkpoint inhibitor of CD47 and SIRPα that primes macrophages both in vitro and in vivo to attack cancer cells. These data  suggest the potential for enhanced antitumor efficacy in combination with immune checkpoint inhibitors and other immunotherapies.

Furthermore, RRx-001 has entered into clinical trials. On the basis of demonstrated antitumor activity and minimal toxicity in phase II clinical trials, RRx-001 has received clearance from the FDA and the EMA for phase III, multicenter studies in subjects with relapsed/refractory solid tumors. 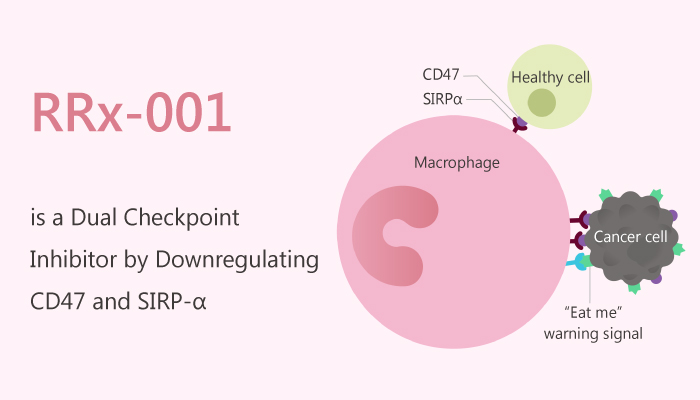