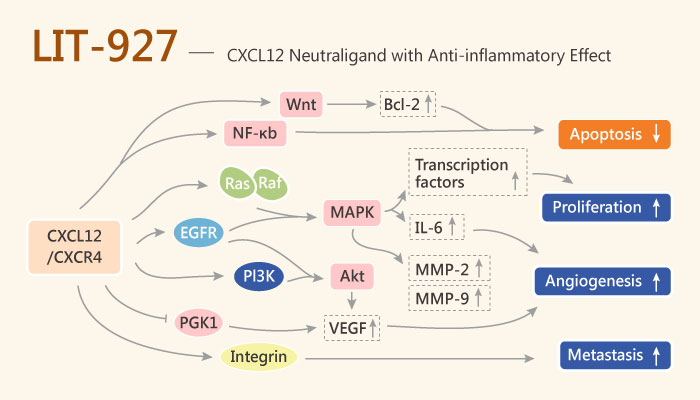 Chemokines act as chemoattractants to guide the migration of cells. They play critical roles in immune response. Notably, one chemokine could bind to many receptors, and various chemokines also could activate the same chemokine receptor. Usually, some members like CXCL12 could regulate the directional migration of leukocytes, both in normal and pathological conditions. Importantly, the chemokines could participate in the occurrence of many diseases, like inflammation, cancer and AIDS. A research from Pierre Regenass, et al. described a systematic SAR study. This study discovered the first orally active, selective neutraligand (LIT-927) of CXCL12. In the study, authors isolated the compound from an allergic airway eosinophilic inflammation in the mouse. Then, LIT-927 is identified as a locally and orally active CXCL12 neutraligand. Besides, the compound has potent anti-inflammatory effect. The Ki value of LIT-927 for CXCL12 binding to its receptor CXCR4 was 267 nM. Meanwhile, the neutraligand is one of the most potent and soluble cyclic neutraligands. It bound to a wide and accessible pocket, incompatible with the observed nanomolar binding affinities of the neutraligands. In vivo, LIT-927 reduces eosinophil recruitment in a murine model of allergic airway hypereosinophilia. Moreover, LIT-927 represents a powerful tool to investigate CXCL12 physiology in vivo. It could explore the activity of chemokine neutralization in related disease models.

Over time, increasing studies have shown that identifying small molecules able to bind chemokines only to neutralize their function is feasible. Hopefully, in the mouse model of allergic eosinophilic asthma, LIT-927 is more potent at reducing eosinophil recruitment, with very low doses after intra-nasal administration (IC50 = 300 nM/kg). Moreover, LIT-927, the first orally active CXCL12 neutraligand, has anti-inflammatory activity. Altogether, LIT-927 is a stable and orally active pharmacological tool, which is used to investigate the functions associated with the CXCL12.