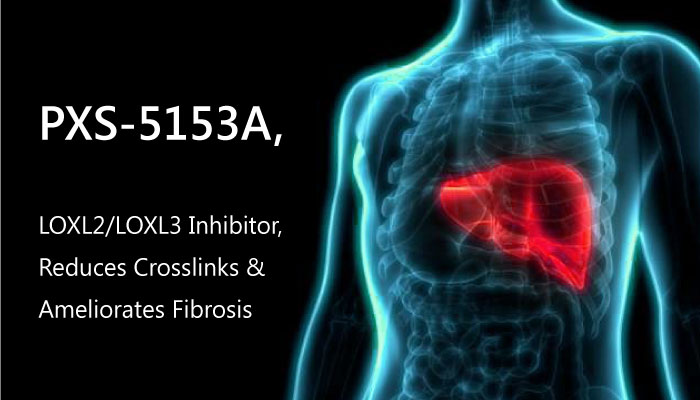 The leading feature of the progressive disease fibrosis is the excessive deposition of extracellular matrix and crosslinked proteins. In particular, the two proteins, collagen and elastin, lead to tissue stiffening and disrupt organ function. The disease can develop in nearly any organ. Moreover, fibrosis is also an important driver of end-stage organ failure and mortality in various chronic diseases. During the progress, lysyl oxidases play important roles. Mechanically, they initiate collagen crosslinking, which subsequently dimerize to form immature, or trimerize to form mature, collagen crosslinks. Emerging evidence has identified the function of LOXL2 in fibrosis and cancer, however, the specific enzymatic function of LOXL2 and LOXL3 is not clear.

A study from Heidi Schilter, et al. characterized function of the dual lysyl oxidase like 2/3 enzymatic (LOXL2/LOXL3) inhibitor PXS-5153A in fibrosis disease. Consequently, PXS-5153A is a potent, selective, orally active and fast-acting inhibitor of LOXL2/LOXL3, with an IC50 of <40 nM for LOXL2 across all mammalian species, and an IC50 of 63 nM for human LOXL3. Not only that, PXS-5153A also reduced crosslinks and ameliorates fibrosis. Both in vitro and in vivo experiments confirmed the activity. As expected, rhLOXL2 induced collagen oxidation with PXS-5153A dose-dependently impeding collagen oxidation. PXS-5153A treatment substantially reduced immature crosslink formation compared with control group. What’s more, the compound also reduced mature crosslink formation. At the same time, the inhibitor caused a significantly reduction in HYP compared to the control group. In addition, the amount of fibrillar collagen is markedly augmented and PXS-5153A reduced the coverage area stained by Picrosirius red. In conclusion, due to the critical role of PXS-5153A in collagen crosslinking, it will become a potential drug candidate to treat fibrosis. Of course, inhibition of the enzymatic activities of LOXL2/LOXL3 may be an innovative therapeutic approach to treat the related disease.