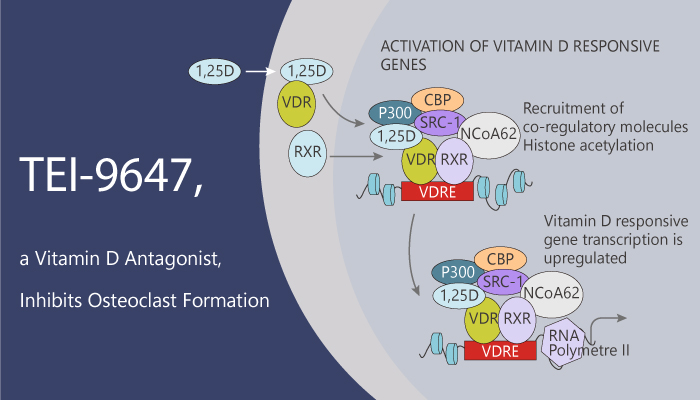 The vitamin D receptor (VDR) is a member of the nuclear receptor family of transcription factors. 1α,25(OH)2D3 is to mediate biological responses as a consequence of its interaction with both a nuclear receptor (VDR) to regulate gene transcription. Besides, it has a putative cell membrane receptor to generate rapid nongenomic effects. Moreover, these include the opening of voltage-gated calcium and chloride channels and activation of mitogen-activated protein kinase. Furthermore, the hormonal form of vitamin D3, 1α,25-dihydroxy vitamin D3(1α,25(OH)2D3) are to stimulate intestinal calcium absorption and to increase bone calcium mobilization. The interactions of the ligand/VDR interacting with a vitamin D-responsive element (DRE) locate on the promoter of regulated genes. In addition, it would be helpful to identify analogs of 1α,25(OH)2D3 that can modulate or antagonize these interactions. TEI-9647 is a first and potent VDR/vitamin D-responsive element (DRE)-mediated genomic actions antagonist with inhibiting osteoclast formation.