Inhalation and deposition of Aspergillus conidia in the lung is the most common route of infection for patients. Existing antifungal medicines are predominantly in orally or systemically. These frequently exploited routes of delivery are poor for treating airway disease since drug concentrations achieved at the site of infection tend to be lower than those in other, healthy organs. In this study, PC945 is an inhaled triazole. It is a tightly binding inhibitor of Aspergillus fumigatus sterol 14α-demethylase (CYP51A and CYP51B) activity. The IC50 values are 0.23 μM and 0.22 μM, respectively. In addition, combining topical treatment using PC945 with systemic treatment using triazoles demonstrates synergistic antifungal effects against Aspergillus fumigatus in an in vitro human alveolus bilayer model and in the lungs of neutropenic immunocompromised mice. 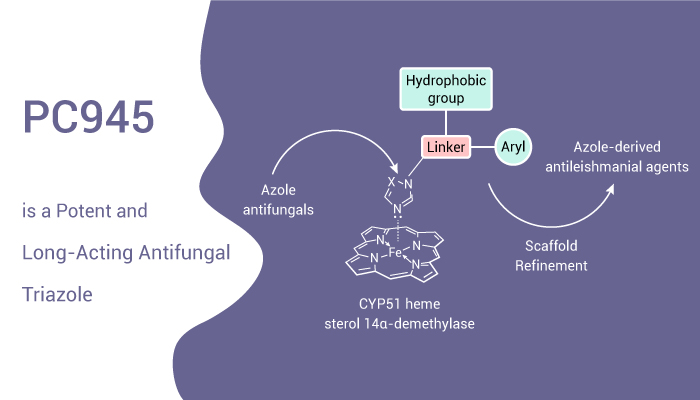 PC945 possesses activity against a broad range of both azole-susceptible and azole-resistant strains of Aspergillus fumigatus. It also exhibits the most potent antifungal activity on azole-susceptible strain NCPF2010 with the MIC value of 0.063 µg/mL. Furthermore, against itraconazole-susceptible A. fumigatus strains, PC945 shows an increase in potency between 20- and 180-fold over that of voriconazole, with a comparable or improved potency versus that of posaconazole. Moreover, PC945, the first antifungal, is a once-daily, topical, inhaled treatment for Aspergillus infection of the lung. In addition, PC945 substantially inhibits the incidence of rolling behavior.

In summary, PC945, a novel antifungal triazole, is specifically for inhaled administration with sustained lung residency and persistent antifungal activity.  It will be a powerful tool to investigate the concept of combination therapy with topical and systemic azoles.