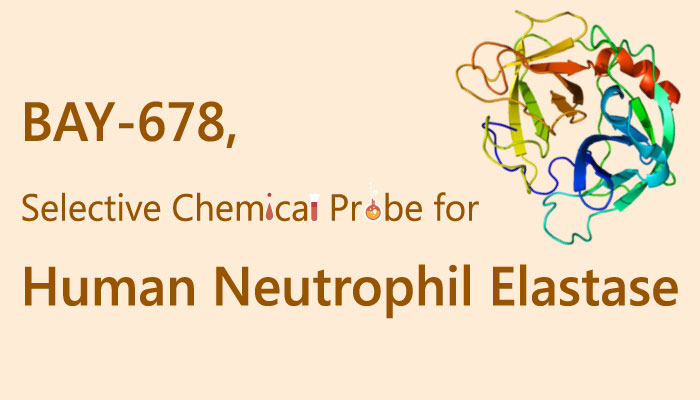 Up to now, a variety of HNE inhibitors have been identified. Only a few of them have entered clinical testing. Recently, a study from Franz von Nussbaum, et al has described the orally active HNE inhibitor BAY-678, with favorable pharmacokinetics. Not only that, it is also a nominated chemical probe to the public via the Structural Genomics Consortium (SGC). Moreover, it has also entered clinical testing.

In the study, the authors identified the high potency of the probe BAY-678 both in vitro and in vivo. Firstly, BAY-678 is an orally bioavailable, highly potent, selective and cell-permeable inhibitor of HNE, with an IC50 of 20 nM. And the Ki value of BAY-678 for MNE is 700 nM. The compound is the 4 th generation inhibitor of HNE. Secondly, BAY-678 has showed significant efficacy in preclinical models of ALI and lung emphysema, revealing its anti-inflammatory activity. Additionally, BAY-678 has also shown vital beneficial pulmonary hemodynamic and vascular effects in rats and mice. Lastly, the safety and efficacy of BAY-678 has been identified in clinical trials with COPD patients and healthy volunteers as control group.

Of course, the application of BAY-678 for the treatment in inflammatory diseases still has a long way to go. However, despite that, it is a major breakthrough for the potential HNE inhibitors development. In addition, the study also suggested that the structure of the inhibitors of HNE are still need to be optimized.