COX-2 is the more important source of prostanoid formation in inflammation and in proliferative diseases. In particular, COX-2 prefers prostaglandin I synthase and the microsomal PGES isozymes. DuP-697 is an irreversible selective inhibitor of COX-2. 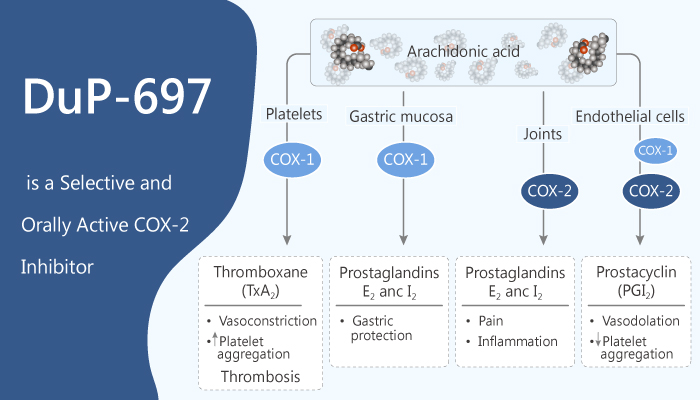 Dup-697 selectively inhibits human COX-2, with significantly less ability to inhibit COX-1. This is consistent with its anti-inflammatory activity in rats without gastric toxicity. Especially, DuP-697 is an orally effective prostaglandin synthesis inhibitor. DuP-697 is a potent inhibitor of paw swelling in nonestablished and established adjuvant arthritis in rats (ED50=0.03 and 0.18 mg/kg/day, respectively). In addition, DuP-697 is analgetic against inflammation-related pain in the Randall-Selitto assay (ED30= 3.5 mg/kg) and is a very potent antipyretic agent (ED50=0.05 mg/kg).

In conclusion, DuP-697 is a selective COX-2 inhibitor that has antiproliferative, antiangiogenic and apoptotic effects on HT29 colorectal cancer cells. DuP-697 may be a promising agent in the treatment of colorectal cancer. Anti-inflammatory drug as an anticancer agent.