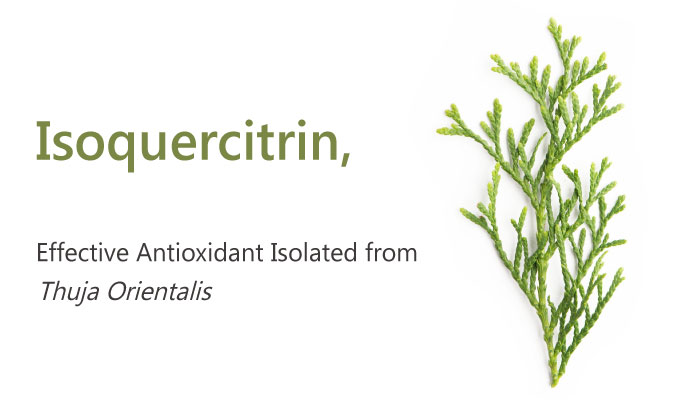 Thuja orientalis is extensively used as an herbal medicine in Korea and China. It is used for treating conditions such as gout, rheumatism, diarrhoea and chronic tracheitis. It is one of the four plants of the Ojibwe medicine wheel. White-cedar foliage is rich in Vitamin C and is believed to be the annedda. T. orientalis contains large amounts of the flavonoids Isoquercitrin (or quercetrin) and rutin. And the flavonoids significantly inhibit xanthine dehydrogenase/xanthine oxidase and decrease serum urate levels. A study from Sang Hoon Jung, et al. extracted and purified seven compounds Myricitrin, Isoquercitrin, hypoletin-7-O-b-D-xylopyranoside, Quercitrin, Kaempferin, Kaempferol, and Amentoflavone. Isoquercitrin occurs widely in plants.

Among these seven compounds, 10 μM of Isoquercitrin partially but significantly blunt the negative effect of H2O2 on RGC-5 cells. Indeed, 50 μM Isoquercitrin showed slightly more effective as a neuroprotectant than the same concentration of EGCG. Additionally, in RGC-5 cells, H2O2 induced apoptosis and this process was blunted by Isoquercitrin. Furthermore, Isoquercitrin reduced ROS production in a concentration-dependent manner in RGC-5 cultures. Not only that, it also inhibited TBARS stimulation by the concentration of 20 μM SNP in a dose-dependently manner, approximately 10 μM. Importantly, Isoquercitrin significantly reduced the up-regulation of cleaved PARP and p53 proteins via western analysis. In contrast, the expression of Gpx-1, Bcl-2, and catalase proteins in cultures exposed to H2O2 was decreased by Isoquercitrin treatment.

Fortunately, Isoquercitrin has entered into clinical trials, which means it’s such a huge breakthrouth.