CXCL17 is a mucosal chemokine that associates with human diseases including idiopathic pulmonary fibrosis (IPF) and cancer. CXCL17 is an antimicrobial mucosal chemokine that may play a role in the pathogenesis of interstitial lung diseases. Especially, CXCL17 is a homeostatic, mucosa-associated chemokine. CXCL17 also exhibits antimicrobial activity. CXCL17 significantly reduces the survival of bacteria or fungi by 3–4 orders of magnitude in a dose-dependent manner.

GPR35 is the receptor of CXCL17. GPR35 expresses in mucosal tissues, in CXCL17-responsive monocytes, and in the THP-1 monocytoid cell line. Furthermore, GPR35 expression downregulates in the lungs of Cxcl17-/- mice, which exhibit defects in macrophage recruitment to the lungs. GPR35 is a G-protein coupled receptor. Thus, GPR35 regulation appears to have profound physiological and pathophysiological implications. These probes will serve as novel tools to delineate the biochemistry of GPR35 as potential therapeutics to selectively target pathways underlying pain and to enhance our understanding of the molecular basis of addiction.

In this study, Binti Mohd Amir NAS, et al examined whether the migratory responses of PGE2-treated THP-1 cells were sensitive to ML 145. In particular, ML 145 is a potent, selective antagonist of human GPR35 with an IC50 value against EC80 concentrations of various GPR35 agonists in the region of 20 nM. All in all, ML 145 is a highly selective human GPR35 antagonist in β-arrestin-2 interaction assays. Importantly, GPR35 is a target for gastrointestinal diseases. 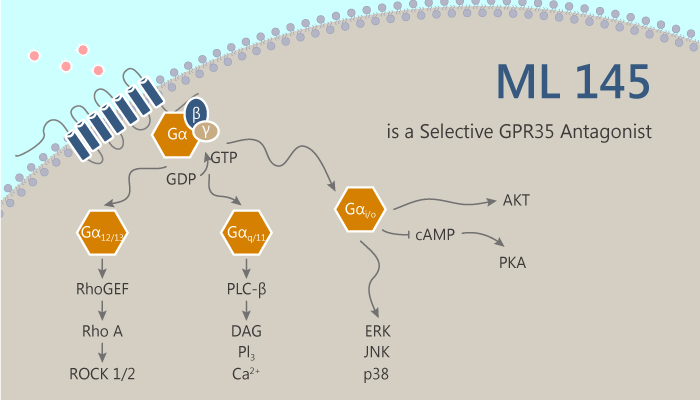