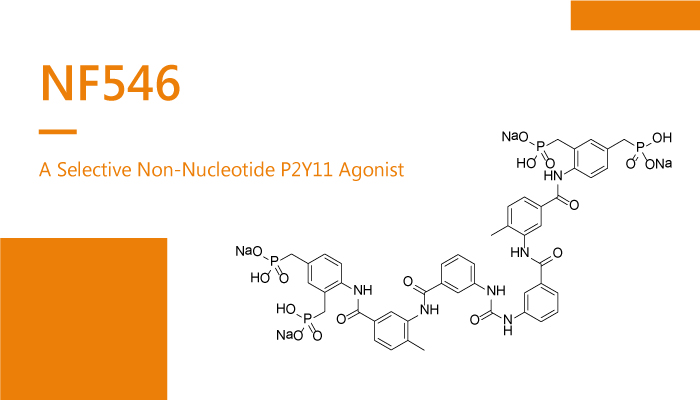 ATP is the endogenous ligand at P2Y11 receptors. In this study, NF546 is a now-available selective P2Y11 ligand. Furthermore, it is a P2Y11 agonist and stimulates the release of interleukin-8 from human monocyte-derived dendritic cells. In addition, NF546 has an advantage over these ATP derivatives, because NF546 can be chemically modified, similarly to the antiviral drug Tenofovir, to become bioavailable. NF546 is relatively selective for P2Y11 over P2Y1, P2Y2, P2Y4, P2Y6, P2Y12, P2X1, P2X2, and P2X2-X3. Moreover, NF546 is equi-efficacious in stimulating TSP-1 release and inhibiting the LPS-induced release of IL-12p70 in human monocyte-derived dendritic cells. It allows in-depth physiological evaluation of the role of the P2Y11 receptors,

In summary, NF546 is a selective P2Y11 ligand and agonist. It will be helpful in further exploration of the physiological role of P2Y11 receptors.