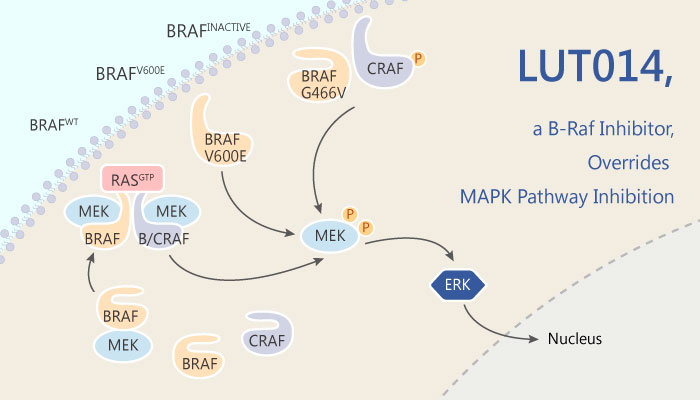 EGFR (Epidermal Growth Factor Receptor) is a receptor on the surface of cells which is expressed in many normal epithelial tissues, including skin. The EGFR signaling pathway plays an important role in regulate growth, survival, proliferation, and differentiation of cells. B-Raf protein, encoded by the BRAF gene, is a downstream effector component of EGFR signaling pathway. EGFR is shown to be over-activated in various human cancers. Besides, Over-activation of the receptor elicits downstream phosphorylation and activation of the MAP Kinase pathway and B-Raf protein.

Moreover, EGFR inhibitors can block the EGFR signal responsible for cell growth. Besides, EGFR inhibitors are increasingly being used both as primary therapy as well as in patients who have failed prior chemotherapy. Although effective as anti-cancer therapy leading to tumor shrinkage, EGFR Inhibitors have a number of adverse reactions associated with their use. Most patients treated with EGFR Inhibitors may experience dermatological side effects typically manifested as a papulopustular skin rash, which can impact quality of life and affect adherence to therapy.

B-Raf Inhibitors have been developed and used for the treatment of some B-Raf-mutated cancers. Blocking the B-Raf pathway in B-Raf mutated cells, indeed, stop them from growing and lead to tumor shrinkage. However, when the same pathway was blocked in wild-type cells, the MAP Kinase pathway is activated and cells start growing. This phenomenon is recognized as the paradoxical effect of B-Raf Inhibitors. LUT014 is a B-Raf inhibitor with an IC50 of 11.7 nM. LUT014 is being developed Lutris-Pharma. Additionally, Leveraging the paradoxical effect of B-Raf Inhibitors, LUT014 decreases dermal toxicities associated with EGFR Inhibitors, thus reducing acneiform lesions associated with such therapy.