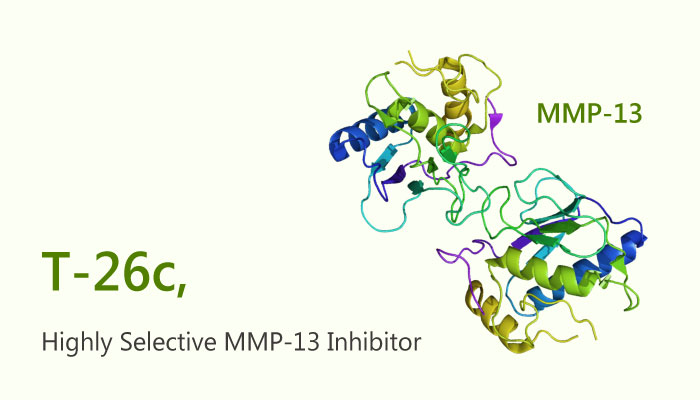 The matrix metalloproteinases (MMPs) are a family of zincdependent enzymes involved in the degradation and remodeling of extra-cellular matrix. There are a large number of potent MMP inhibitors on the market. Most of the earlier generation inhibitors have hydroxamic acid moiety as the zinc-binding group. Many of these small-molecule inhibitors showed a broad-spectrum inhibitory effect and were not selective between the MMP isoforms. Furthermore, a number of non-selective MMP inhibitors have been abandoned because of their musculoskeletal side effects characterized by joint stiffness and pain. Therefore, there is a great need for a new generation of inhibitors with improved potency and reduced toxicity. MMPs are important therapeutic targets for various diseases such as osteoarthritis, rheumatoid arthritis, inflammatory bowel diseases, periodontal disease. Among the MMP family, MMP-13 has been suggested to be intimately involved in the destruction of joint components in osteoarthritis. Therefore, MMP-13 inhibitors are expected to be disease-modifying drugs for osteoarthritis. T-26c is highly potent and selective MMP-13 inhibitor with an IC50 of 6.75 pM. It has more than 2600-fold selectivity over the other related metalloenzymes.

Nara et al foun that T-26c potentially improved physicochemical properties such as water solubility and hence could improve the oral bioavailability. Furthermore, T-26c significantly inhibited degradation of explants of bovine nasal cartilage induced by the treatment with a combination of interleukin-1 and oncostatin M. Oral administration of the disodium salt formulations of T-26c to guinea pigs resulted in significant increases in AUC and. The compound was well absorbed in all species at the oral dose of 10-20 mg/kg.