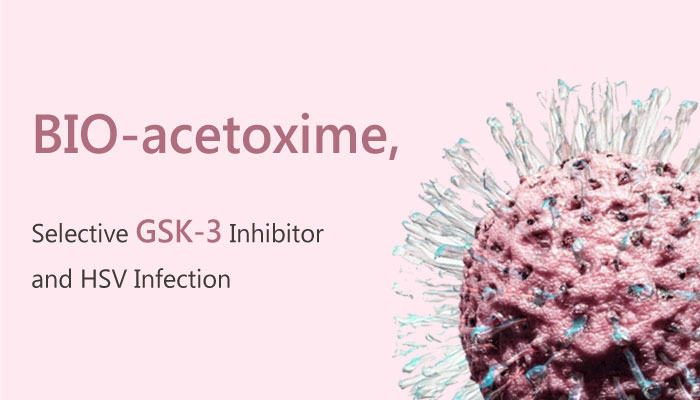 Tyrian purple is a natural dye produced by gastropod mollusks. It consists of mixed bromine-substituted indigo and indirubin isomers. Among them, there are natural products and their derivatives. They possess potent activity on glycogen synthase kinase-3 (GSK-3). GSK-3 is a serine/threonine protein kinase, with two types, GSK-3α and GSK-3β. It mediates the addition of phosphate molecules onto serine and threonine amino acid residues. It is interesting to see whether the synthetic analogues of these natural products are also effective on GSK-3.

During a series of procedures, they synthesized and purified a lot of compounds. They are similar in structure. Some of them are only one or two atomic difference in structure. BIO-acetoxime (Compound 13) is one of the analogues. It is a potent and selective GSK-3 inhibitor, with IC50s of 10 nM for the two isoforms GSK-3α/β. BIO-acetoxime shows weak activity against CDKs, such as CDK5/p35, CDK2/cyclin A and CDK1/cyclin B. The corresponding IC50s are 2.4 μM, 4.3 μM and 63 μM, respectively.

In another report, BIO-acetoxime is used in the research of antiviral innate immune response. The GSK-3 inhibitor exhibits markedly anti-HSV-1 activity. It inhibits the viral replication of HSV-1, and its release with an EC50 of 0.68 μM. BIO-acetoxime blocks the expression of HSV-1 genes, such as ICP0 and ICP27. Moreover, it suppresses HSV-1-induced cell death.

Overall, BIO-acetoxime is a potent and selective inhibitor of GSK-3, by binding the ATP-binding pocket. It also displays anti-HSV activity. But the specific mechanism of BIO-acetoxime in the inhibition on HSV needs to be further studied. It is of great value to discover the relationship between GSK-3 and HSV-1 infection.