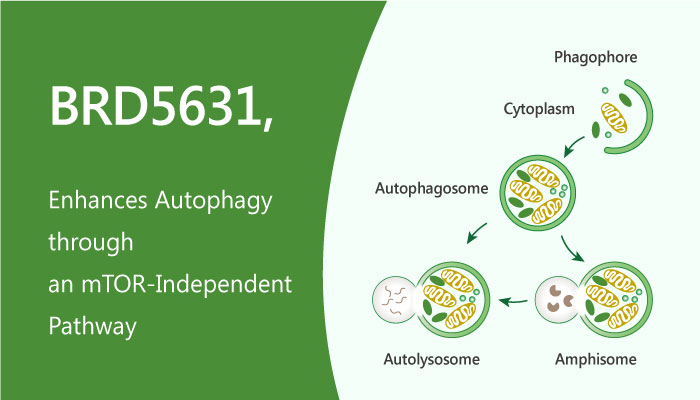 Firstly, the authors screened and identified novel small-molecules modulators of autophagy by high-throughput. Among the molecules, BRD5631 was confirmed that both structural features were important for its activity.

The authors found that BRD5631 came from diversity-oriented synthesis and enhances autophagy through an mTOR-independent pathway. Additionally, BRD5631 affects several cellular disease phenotypes previously linked to autophagy, including cell survival, bacterial replication, and other action. In other words, BRD5631 can serve as a valuable tool for studying the role of autophagy in the context of cellular homeostasis and disease.

Furthermore, BRD5631 (10 μM, 48 hours) led to increased levels of LC3-II in HeLa cells.
And BRD5631 stimulated formation of new autophagosomes, which is consistent with its ability to increase numbers of autolysosomes in the mCherry-GFP-LC3 assay. However, BRD5631 does not enhance autophagy by directly inhibiting mTOR or the mTOR signaling pathway. Notably, BRD5631 suppressed IL-1β secretion in an autophagy-dependent manner.

All in all, BRD5631 and its mechanism of action may reveal therapeutically beneficial mechanisms for modulating autophagy in human disease. However, up to now, further studies are needed to investigate how BRD5631 promotes autophagy in cells, and which regulatory pathways are involved in this process. Hope BRD5631 will be an effective clinical drug to treat autophagy-related diseases.