Cryptosporidiosis is a kind of parasitic diseases, caused by Cryptosporidium. The parasite commonly exists in HIV-positive patients. It is harmful to the distal small intestine and affects the respiratory tract in both immunocompetent and immunocompromised patients. Consequently, it results in watery diarrhea. Cryptosporidiosis is worldwide, and causes more than half of water-borne diseases.

Therefore, it is essential to find out anti-Cryptosporidiosis drugs.

Recently, Christopher S. Lunde screened more than 7000 benzoxaboroles analogs for anti-Cryptosporidium assay. They found that AN7973 is a promising one. Then, let’s see how AN7973 works. 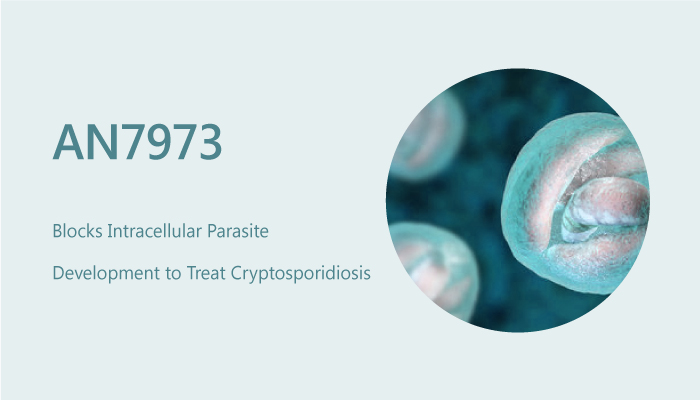 To begin with, AN7973 is active against Trypanosoma brucei. In further study, AN7973 also exhibits potent inhibitory effect on different kinds of parasites. It inhibits Bunch Grass Farm (BGF) C. parvum Iowa isolate in HCT-8 cells, with EC50s in the range of 0.13-0.43 µM. Moreover, AN7973 less potently suppresses C. hominis TU502 isolate with higher EC50 values. AN7973 blocks asexual parasite growth more significantly than asexual-stage to sexual-stage differentiation. Besides, AN7973 can rapidly obliterate Cryptosporidium in vitro.

Based on the potent activity in vitro, research studied the possibility of AN7973 in vivo. AN7973 is orally active, and exhibits good pharmacokinetic properties in mouse as well as in calf.

In order to identify the anti-infective activity in vivo, researchers underwent the assay in mice. They established the model infected with C. parvum. As a result, AN7973 (10, 25 mg/kg) dramatically decreases parasite shedding by >90% and >99%, respectively.

In summary, AN7973 is a promising candidate for cryptosporidiosis treatment. It is effective on both C. hominis and C. parvum. AN7973 deserves more study in the future.