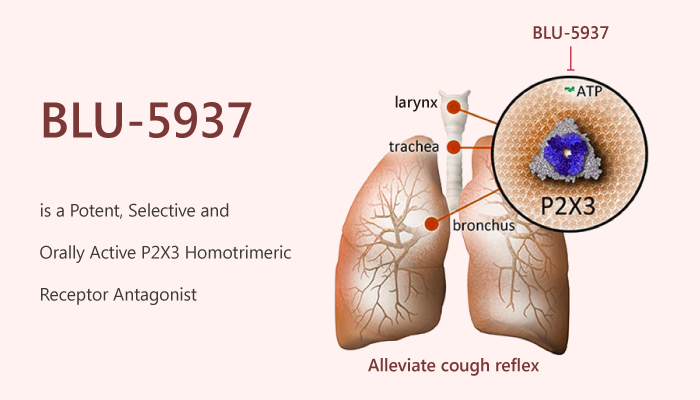 Cough is an essential defensive mechanism for the airways to prevent harmful gasses or particles from the environment. The chronic cough often lasts for over 8 weeks. It is vital to find out safe and effective treatments for cough.

In many observations, researchers report that cough is triggered by innocuous stimuli, such as perfume, cold air, or talking. Due to this, chronic cough hypersensitivity syndrome (CHS) has been developed to describe a persistent cough with a difficult-to-satiate urge to cough.

An important target that takes part in CHS is the neuronal excitability regulator P2X3. Vagal C-fibers innervating the airways can express P2X3 receptors. And P2X3 receptors play its role in the airways as an ATP-competitive manner. The depolarization initiates action potentials and produces an urge to cough.

In this article, we will introduce a potent, selective, and orally active P2X3 homotrimeric receptor antagonist, BLU-5937.

In rat dorsal root ganglions (DRGs). BLU-5937 (500 nM) can block αβ-meATP-induced sensitization and firing activity of isolated primary nociceptors, through P2X3 homotrimeric receptor antagonism. Besides, the sensitizing effect of αβ-meATP and the inhibition of BLU-5937 are reversible after washout.

In male guinea pigs, BLU-5937 treatment significantly reduces the histamine-induced enhancement in the number of citric acid-induced coughs in a dose-dependent fashion.

Besides, BLU-5937 at 3 or 30 mg/kg shows to reduce significantly and dose-dependently the ATP-induced enhancement of citric acid-induced coughs.

In a rat behavioral taste model, when compares to the control group, BLU-5937 cannot alter taste perception. Also, the Pharmacokinetic analysis shows that BLU-5937 does not affect taste function at concentrations up to 30 times the IC50 for P2X3.

In conclusion, as a potent, selective, and orally active P2X3 homotrimeric receptor antagonist, BLU-5937 significantly reduces the histamine-induced enhancement in the number of citric acid-induced coughs in guinea pigs. In contrast, it has a little inhibitory effect on taste perception.