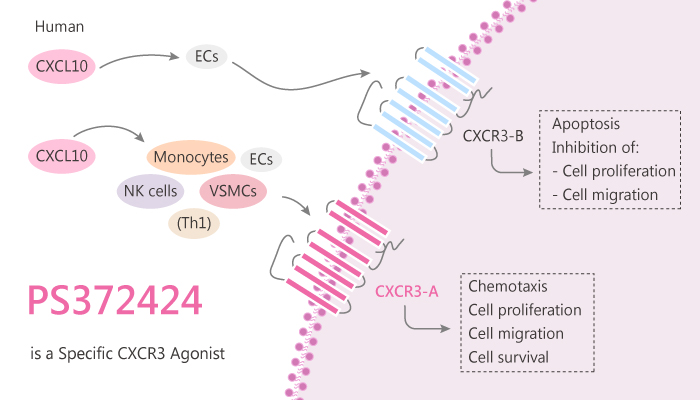 Chemokines are low-molecular weight proteins that mediate the migration of leucocytes. Crucially, chemokines exert their effects by binding to specific GPCRs expressed on the leucocyte surface. Of these, the chemokine receptor CXCR3 is a member of the seven transmembrane-spanning G protein-coupled receptor (GPCR) superfamily. Importantly, CXCR3 is one of the most abundant chemokine receptors on Th1 cells. In addition, the natural chemokine ligands for CXCR3, CXCL9/Mig, CXCL10/IP-10, and CXCL11/I-TAC play a key role in directing activated T cells and other cell types to sites of inflammation. CXCR3 also functions in angiogenesis.

Activation of the receptor has an angiostatic effect and expression of the receptor in endothelial cells. Especially, activation of an alternatively spliced variant of CXCR3 and CXCR3-B likely mediates the angiostatic effect. Particularly, the chemokine receptor CXCR3 usually expresses on the surface of a substantial proportion of freshly purified T-cells. Moreover, CXCR3 binds the chemokines CXCL9/Mig, CXCL10/IP-10 and CXCL11/I-TAC. Besides, IFN-γ induces all three CXCR3 ligands. All three CXCR3 ligands promote Th1 immune responses notably in several clinically important inflammatory disorders, including rheumatoid arthritis and atherosclerosis. The chemokines CXCL10 and CXCL11 have distinct potencies and efficacies in a variety of assays, including internalization and cell migration. CXCL10 and CXCL11 interact with CXCR3 in different ways and are likely to stabilize different conformations of the receptor.

In this study, Stroke IL, et al used small molecule CXCR3 agonist PS372424 to probe the structure–function relationships of ligands and receptor. As a result, PS372424 competes for binding of radiolabeled CXCL10 to membranes prepared from HEK293/CXCR3 Gqi5 cells with an IC50 of 42±21 nM.