Annexin A2 (A2) expresses in plants, animals, and protists throughout the phylogenetic tree, it belongs to the annexin family A2 can be produced by endothelial cells, monocytes, macrophages.
It is a 36-kilodalton protein and exists in the cytoplasm and intracellular and plasma membrane surfaces.

The human papillomaviruses (HPV) are a sexual-transmitted virus. Besides, HPV infections causally associate with some cervical cancers. some high-risk HPV genotypes, especially HPV16 leads to approximately 50% of all cervical cancers. HPV16 is an obligatory intracellular virus and its viral replication always exists in the nucleus of basal epithelium host cells.

The annexin A2/S100A10 heterotetramer (A2t) facilitates the entry of HPV16 into epithelial cells through a direct protein-protein interaction (PPI).  Annexin A2 (A2) is a monomer in the cytoplasm and becomes a heterotetramer containing two A2 monomers non-covalently bridges to an S100A10 dimer.

In this article, we will introduce an inhibitor that specifically disrupts the PPI between A2 and S100A10, A2ti. 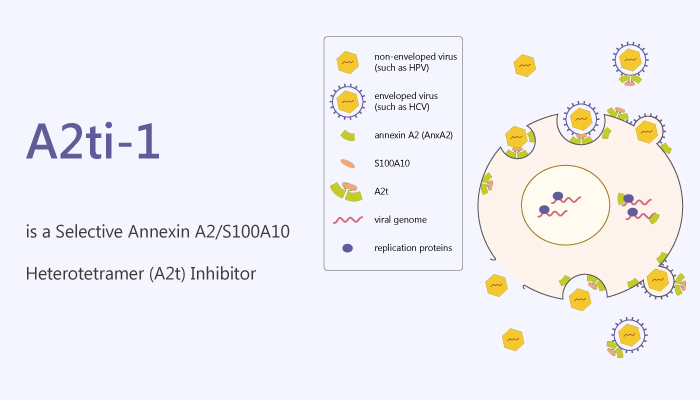 A2ti-1 is a selective and high-affinity annexin A2/S100A10 heterotetramer (A2t) inhibitor with an IC50 of 24 μM. A2ti can inhibit HPV16 entry and infection of epithelial cells.

A2t is an HPV16 uptake receptor at previous has reported. The S100A10 subunit of A2 binds to HPV16 L2. At the same time, A2t facilitates HPV16 entry and infection in an L2-dependent manner. However, A2ti-1 leads to a significant decrease in HPV16 PSV internalization. It also leads to a complete reduction in HPV16 PSV infection in epithelial cells.