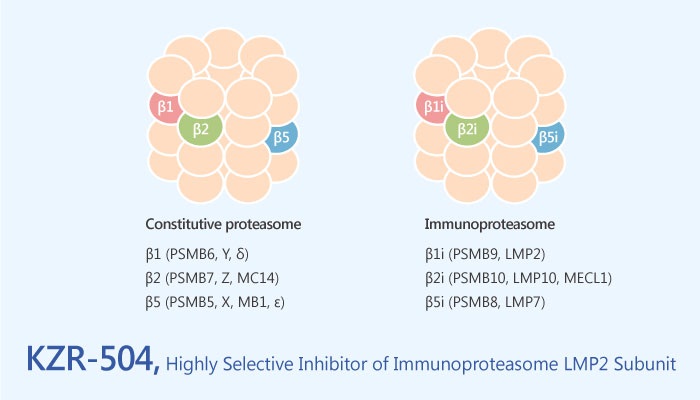 Firstly in the study, the authors screened a focused library of epoxy ketones, which revealed a series of potent dipeptides. Then the authors found a highly selective inhibitor KZR-504. And KZR-504 exhibits IC50 values of 51 nM, 4.274 μM for LMP2 and LMP7, respectively.

Based on the attractive potency and selectivity profile of KZR-504, the authors also evaluated it in vivo. As a result, KZR-504 exhibits significantly lower permeability that other compounds tested in the study. Evaluating the inhibition of LMP2, and anti-targets LMP7 and β5, in mouse tissues reveals that KZR-504 is both selective and potent in vivo with >50% target inhibition achieved at >1 mg/kg in all tissues tested except brain. However, KZR-504 appeared to have little to no effect on cytokine production.

Furthermore, KZR-504 has a selective dose of administration  in vivo. Collectively, the desirable properties of KZR-504 make it an excellent addition to the armory of molecules available in the hunt for a more complete understanding of proteasome biology.