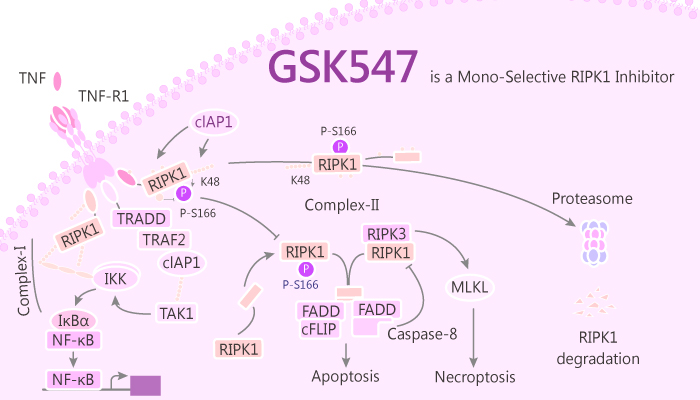 Pancreatic ductal adenocarcinoma (PDA) is the most common pancreatic cancer. It is characterized by immune tolerance. However, tumor-associated macrophages express high levels of RIPK1 in PDA.

Thus, inhibition of RIPK1 has the potential in the treatment of PDA via macrophages.

In the beginning, researchers proved RIPK1 is a potential target in PDA. So they carried out a series of experiments to find out the potential compound. Consequently, they discovered GSK547 (RIP1i; GSK’547) as the promising one. GSK547 is a potent and highly selective of RIPK1, due to binding in the allosteric pocket between the N-terminal and C-terminal domains at the back of the ATP binding site.

Totally, GSK547 is a highly selective RIPK1 inhibitor, acts on inflammatory cells and is protective against PDA.