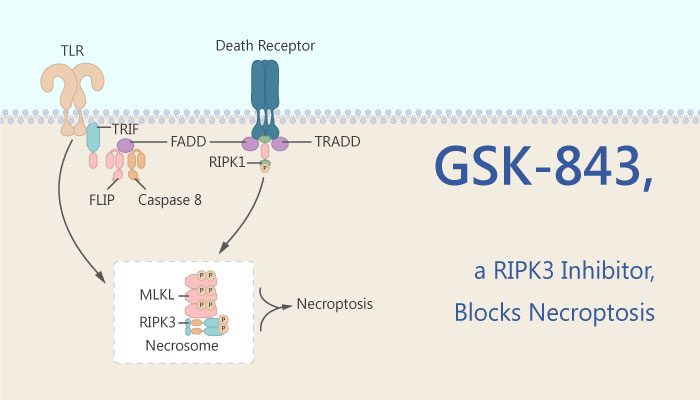 Necroptosis is an alternative form of programmed cell death that is triggered when apoptosis is inhibited. Apoptosis is characterized by a requirement for caspases. Receptor-interacting protein kinase 3 (RIP3 or RIPK3) has emerged as a central player in necroptosis and a potential target to control inflammatory disease.

A study from Pratyusha Mandal discovered and identified three selective small-molecule compounds. All the three compounds are shown to inhibit RIP3 kinase-dependent necroptosis, although their therapeutic value is undermined by a surprising, concentration-dependent induction of apoptosis.

In previous studies, the authors have identified the RIP3i GSK-843 and GSK-872 by screening conventional small-molecule libraries. GSK-843 is a receptor-interacting protein kinase 3 (RIP3 or RIPK3) inhibitor. It binds RIP3 kinase domain with an IC50 of 8.6 nM. The compound also inhibits kinase activity with an IC50 of 6.5 nM. Moreover, in this study, GSK-843 bound to RIP3 kinase domain and inhibited enzyme activity with minimal cross-reactivity. The authors also evaluated cytotoxicity of RIP3i compounds in different cell types. As a result, treatment with GSK-843 at either 3 μM or 10 μM uniformly triggered cell death that was reversed by zVAD.

To conclude, GSK-843 binds the kinase domain and inhibits kinase activity with high specificity, targeting a broader range of pronecrotic stimuli than can be achieved with RIP1 kinase inhibitors.